Marco Gervais: The Transition from the Town of Falher to the Smoky River Regional Water Management Commission and Into Retirement 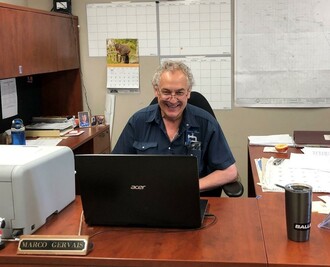 When Marco Gervais started working in the water/wastewater industry there was no such thing as a certification program. He was grandfathered in and operated under a restricted certificate. Now, 40 years later he is retiring with certification in all four disciplines and a legacy of spending his entire career in the same town at the same plant.

Marco grew up in Falher, spending some time in Edmonton before moving back to his hometown to raise a family. In 1981, he accepted a position with the Town of Falher’s Public Works department where his career in water/wastewater would begin. After 25 years with the town, Marco oversaw the transition of operations from the Town of Falher to the Smoky River Regional Water Management Commission. He became the Commission’s manager and in time learned the responsibilities of the job and the municipality. While the commission only began with Marco and one half-time employee, it would grow to three people.

The Commission began to form when the Village of Girouxville approached the Town of Falher for water after their small batch plant burned down. The hamlets of Guy and Jean Cote had also already connected lines to the Town of Falher’s water system and the Village of Donnelly’s plant was not meeting standards. To address the issues of the time, it was deemed simplest to create the Smoky River Regional Water Management Commission where water would be provided to all municipalities.

After 40 years in the industry, it is no surprise Marco has a few memorable experiences. Not long after he began with Public Works, with a crew of only 3, Marco was asked to oversee the water plant while his superintendent took some time off. The period was only 9 days but it is a lasting memory held to this day.

Another memory and achievement Marco holds is one of solving a problem. After years of difficulty with the original filter in the 1980 water plant, Marco took on the role of project manager to come up with a solution. As turbidity limits became more stringent, the plant was in contravention with every backwash. With no funding available, Marco reached out to Garry Leathem with the Town of Fairview who had recently converted to the AWI system. After receiving a good word, AWI was contacted and in two months the project was complete. With the new system in place, the plant hasn’t been in contravention since. Marco notes it as the best half a million he’s ever spent.

With a succession plan in place, the operation will be left in capable hands upon Marco’s retirement at the end of December 2021. He looks forward to spending more time with his family, grandkids, camping, cycling, traveling and not answering alarms.

“Water is the source of life! It has been a privilege to supply the community and later the region with safe and reliable potable water.” – Marco Gervais, Smoky River Regional Water Management Commission

“Marco has been a staple in our community, volunteering countless hours for many different organizations over the years.  He is a devoted family man and is a very well-known and a highly respected individual in our region. Thanks for being a great mentor, Marco, and I hope every new operator is lucky enough to have a boss like you who holds such high standards. Your helpful nature, patience, and calm demeanor translates into the kind of manager you are. I appreciate the fresh start you have given me in such a reputable career and wish you all the best in the next chapter of your life.” – Rick Gervais, Smoky River Regional Water Management Commission

Thank you to Rick Gervais and Marco Gervais, Smoky River Regional Water Management Commission, for providing this information to the AWWOA.

Share This
Call for Nominations - Give Back to Your Industry!
47th Annual Operators Seminar - Registration is Open!